Welcome to our new Weekend Series, where we’ll take a nice needed respite from the bad books we forces ourselves through and talk about some of our favorite GOOD books we’ve read.

If you can’t tell from my previous posts, I’ve had the Malazan Book of the Fallen series on my mind a lot the last few, well, months. Aside from a few breaks here and there to read a few new books that came out during my spree, the Malazan series is pretty much all I’ve read since January 1st. I didn’t mind only reading this one series, though, because it’s SO GOSHDARN GOOD. It’s so good.

Gardens of the Moon is the first book of the Malazan Book of the Fallen series. I’m not going to lie, this book really feels like the first book of a series. It was written 10 years before Erikson was able to find a publisher for it, and you can really tell that the writing suffered for it being Erikson’s first novel. It’s not easy to get through the first 100-150 pages, as you really just get tossed immediately into a huge action sequence, and it takes a good amount of time to start really identifying the characters.

I rely heavily on the dramatis personae that’s included in the beginning of each Malazan novel just to keep each character straight. I also have a bad habit of forming favorites and then double checking the dramatis personae before I start reading a book to see if they’re included in the story. I’m never disappointed when they’re not included, though!

“Every decision you make can change the world. The best life is the one the gods don’t notice. You want to live free, boy, live quietly.”
“I want to be a soldier. A hero.”
“You’ll grow out of it.”

Gardens of the Moon drops you immediately into the siege of Pale, a city on the continent of Genabackis. You’ll become very familiar with Genebackis over the course of the series. Here is where you first meet the Bridgeburners, including Whiskeyjack, Fiddler, Kalam, Quick Ben, Ganoes Paran, Hedge, Sorry and others. You’ll also meet the mages Tattersail, Hairlock, and Tayschrenn. The siege is terrible and brutal, thanks to the powerful onslaught of the Tiste Andii lord Anomander Rake, who rules over Moon’s Spawn, a giant floating fortress of a city. Few survive.

The cover of this book shows a scene straight out of the battle of Pale. This is before it totally goes to shit.

This sets the tone of nearly all of Erikson’s Malazan novels. The battles are brutal and not many survive. If you think George R.R. Martin is vicious to his characters (and thus his fans), he has nothing on what the characters of Malazan are forced to endure.

Fiddler is one of my top favorite characters.

Following the battle of Pale, we head to Darujhistan, one of the last Free Cities (meaning free from Malazan control – think of the Malazan as Ancient Rome. They’re trying to conquer the world.) of Genabackis. In Darujhistan, we are introduced to another slew of beloved characters: Kruppe, Crokus, Rallick Nom, Murillio, Coll, Baruk, Vorcan, The Eel, Circle Breaker, etc… The remaining Bridgeburners of the Malazans are sent to Darujhistan to set the stage for the eventual siege, and along the way they encounter nothing but trouble. Also, there may be a couple of Gods milling about, fucking everything up as they go.

“Tell me, Tool, what dominates your thoughts?’
The Imass shrugged before replying.
‘I think of futility, Adjunct.’
‘Do all Imass think about futility?’
‘No. Few think at all.’
‘Why is that?’
The Imass leaned his head to one side and regarded her.
‘Because Adjunct, it is futile.”

Meanwhile, Adjunct Lorn (basically Empress Laseen’s right hand) is sent to the hills outside Darujhistan to unleash a terrible figure rumored to be buried within. It’s a Jaghut Tyrant, who upon release will begin a destructive rampage on the continent. Along with her are Toc the Younger and Tool, a T’lan Imass (undead race of people who existed for milennia before humans, who had vowed to kill every last Jaghut in existence).

One of my favorite fan-art images of Tool (Onos T’oolan).

This is the main jist of the plot… but there’s so many different subplots I haven’t even mentioned. Too many to mention, honestly. This book is dense, and it’s one of the least dense of the series, I’d wager. It is heavy on introduction; in just one book we’re introduced to the following concepts:

There’s just so much that you learn about the world while reading the book that I can definitely understand why it feels so difficult to get through. I’ll admit, the first time I tried reading this book, I gave up around 100 pages in. It was just too much too quickly and I never got over how confusing it all was. Now, after having read GotM THREE times, I’m going to let you all in on a little secret:

You never stop being confused.

But you never actually mind.

“Ambition is not a dirty word. Piss on compromise. Go for the throat.”

The world of the Malazan series is just insane. It’s probably what drew me in and kept my interest even during bits I found terribly uninteresting. The world of the Malazan series never feels like it’s too much. This likely comes from Erikson’s background: he’s an anthropologist and archaeologist by trade. This means that what Erikson finds interesting and important about a world differs immensely from what a normal person may find interesting or important. The level of detail involved in the world-building in this series is the number one thing I love about this series. I’d say that the WORLD that the Malazan series exists in is my favorite character of the entire series.

“Play on, mortal. Every god falls at a mortal’s hands. Such is the only end to immortality.”

Then there’s the characters. There’s a few that I instantly fell in love with and wanted to know more about them. There’s some I really couldn’t stand. There’s those who I didn’t quite understand. There’s just SO MANY to get to know. On top of that, there’s the descriptions of them to help them stand out. My imagination is good, but sometimes it’s really helpful to see artist representations of the characters. This is where I relied very heavily on the Malazan Wiki to make sure that I had a good grasp of what each character looked like. This series is so massive that there’s a good amount of fan art for every character, so even if one doesn’t match up to your expectations, something has to!

Did I mention the Hounds yet? Or Shadowthrone?

The end of this novel sets up the next bit of the series that takes place (mostly) on Genebackis, however we don’t get back to it until the third book. I didn’t realize this until I had already picked up the second book of the series, so that almost stopped me yet again in this series. I didn’t know if I could handle learning yet another huge cast of characters. Luckily, we do get to follow a few of my favorites from Gardens of the Moon in book two, Deadhouse Gates, and honestly, DG ended up being one of my favorites from this series. 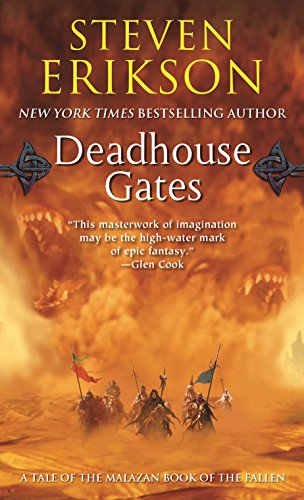 You guys have no idea what you’re in for with this next book.

“Self-righteous wrath had planted more corpses in the ground than an empire could lay claim to,”

So, no matter how confusing this book typically comes off as, it’s still an amazing read to start off your inevitable love affair with the entire Malazan Book of the Fallen series.

One response to “Weekend Respite: Good Book Review – Gardens of the Moon by Steven Erikson”