Actually, I take that back. A lot of these descriptions are super close to assault. Merry is describing Mistral’s mouth on her breast as a” prison of his mouth”. Once she starts orgasming, Mistral holds her down while she fights against him to move, “So good that I wanted him both to stop, and never to stop.”

Now I want this to stop. It doesn’t, though. It continues with more of Merry actually wanting this whole thing to end, and yet…

I started to say no, because he hadn’t asked, and because the magic was receding. I could think again, as if the orgasm had cleared my mind.

I don’t even understand how this scene is not rape. Merry never told Abeloec he could have sex with her, she never granted any permission other than kissing him and allowing him to go down on her. That still isn’t fully consent! However, the overarching plot of this story, you know, Merry must have as much sex as possible in order to conceive, so LKH has built in a disgusting plot device so that Merry basically cannot say no, otherwise she will likely die. It’s so disturbing that this is all deemed as just peachy for the story. Merry obviously wants to say no to the sex in this scene, and yet

It wasn’t like me to lose interest so quickly. If Abeloec was as talented with other things as he was with his mouth, then he was someone I wanted to bed, just for sheer pleasure. So why did I suddenly find myself with no upon my lips and a desire to get up off the ground?

THEN A VOICE CAME OUT OF THE GROWING DARK AS THE LINES of color faded – a voice that froze us all where we were and sent my heart pounding into my throat. 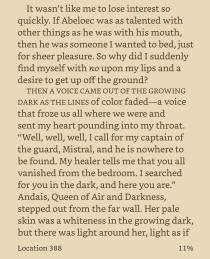 Anyway, Andais shows up all pissed off that Mistral left her side. He tells her he sought guidance from Doyle, her former captain of her guard, and she doesn’t believe him. She’s about to attack him with a knife when Merry shouts out “No!” Oh, when will Merry learn that her interference in any of Andais’s torturous plans always end in more anger?

So Doyle tries to convince Andais otherwise, that instead of punishing Mistral, they should try bringing the gardens back to life again, which brings about this ridiculous scene:

She smiled most unpleasantly. “Do you propose to spill more of Meredith’s precious blood? That was the price for the roses’ renewal.”
“There are ways to give life that do not require blood,” he said.
“You think you can fuck the gardens back to life?” she asked.

Now, if this series were about Merry just traveling to all the once living areas of faerie to fuck it back to life, I think it’d be way more entertaining to read. Instead, we get a super shallow author’s attempt at deep thinking and it’s just sad.

Andais says she’d love to watch Merry fuck her gardens back to life, and Rhys gets all up in her face about how she’s not welcome. He’s all bold now because apparently some fish has imprinted on his arm, and everyone is all “whoa” or “wow” and astonished it’s there.

He held his arm out toward me. There was a pale blue outline of a fish that stretched from just above his wrist almost to his elbow. The fish was heading down toward his hand and seemed oddly curved, like a half circle waiting for its other half.

Abeloec touched it much as the queen had done, lightly, with just his fingertips. “I have not seen that on your arm since I stopped being a pub keeper.”
“I know Rhys’s body,” I said. “It’s never been there before.”

“Not in your lifetime,” Abeloec said.

I closed my mouth so I wouldn’t say something stupid.

NO, MERRY, THAT IS EXACTLY WHEN YOU CALL RHYS OUT FOR BEING A FEDORA-WEARING WELL-ACTUALLY MANSPLAINER.

“A salmon means knowledge. One of our legends says that because the salmon is the oldest living creature, it has all the knowledge since the world began. It means longevity, because of the same legend.”

“Legend, is it?” Rhys said with a smile.

“I have a degree in biology, Rhys; nothing you say will convince me that a salmon predated the trilobites, or even the dinosaurs. Modern fish is just that, modern, on a geological scale.”

Ahahahahaha I hate this so much. Your biology degree is worthless, Merry. And likely extremely outdated now anyway, since, you know, you’re in fucking faerie where up is down and rain is dry and nothing ever matters so long as it’s convenient for the plot.

Rhys goes on to explain what this fish mark means. The sidhe were once covered with symbols gifted to them by the Goddess, but as they faded in power so did their marks. Rhys says he hasn’t seen that mark in over 4,000 years. Then Nicca pipes up – he’s also now got a mark, but he had never had one before, so all the men start checking over their bodies to see if their marks had returned or if they were gifted new marks.

Andais is unhappy with this turn of events and calls Mistral to leave with her, but Merry’s men argue that he should stay to help Merry and Abeloec finish what they started in the gardens. “Does grass grow without wind and rain?” Yes, it fucking does. Anyway, Andais agrees that Merry can fuck Mistral just this one time, and then before they get back to the sexytimes, ANOTHER fight starts.

This time it’s because Andais says she’ll return to what she was doing before she noticed Mistral had left her side, which was torturing all of Nerys’s clan because of the crimes that had been committed in the previous book. Which tells you how impactful this series actually is because even though I just reviewed it chapter by chapter, I could not, for the life of me, tell you anything that actually happened in that book other than MERRY FUCKING A MUD-MAN BACK TO LIFE.

Andais had given Nerys’s clan a choice: either join her or her son’s guard or live forever without magic walled up inside the sithen. Nerys had given her life for Andais’s oath that no harm would come to them, and Andais is actually… holding to the oath by not actually harming them? Anyway, Mistral went to seek Merry to intercede on behalf of Nerys’s clan. Rhys then tells Andais that she’s going too far and Andais disagrees and then we get another speech about how the sidhe cannot lie.

I don’t even know whether or not that is true. It’s mentioned multiple times that the sidhe cannot lie. But then we’re also told that they have to lie at times, usually to the Queen herself, as the truth tends to incite her. And Andais is always running around accusing people of lying, but the sidhe cannot lie?

Also, Merry has hardly spoken at all during this. She’s supposed to be the next ruler of the Unseelie court, and she’s been galavanting around bringing life back to the sithen with her magical vagina, and yet pretty much every major decision in this chapter thus far has been between the Queen and one of the guards. Doyle bargains that if Merry can help bring life back to the gardens (through sex. Sex she didn’t want to have with Abeloec in the first place. Bargaining Merry’s body without her explicit permissions at that.), then Andais cannot punish Nerys’s people any further.

Oh, and during this whole thing, the phrase “pixie out of a deal” is mentioned several times. This is a fun new slur. Pixies are fey peoples in this series. Saying that someone is “pixie-ing out of a deal” is essentially saying they are reneging on it. No one has even brought up how this slur shouldn’t be used, either.

Before Andais leaves after accepting the deal, she and Merry have a little side-chat about how Merry should be careful with Mistral because he likes to cause pain during sex. Merry jokes that wouldn’t that make him a perfect lover for Andais, and Andais admits she only likes causing pain, not taking it. Merry’s got a huge bite mark on her breast from Mistral, and Mistral apologizes for it, saying “I am sorry if I hurt you, but it has been so long since…” It’s been like a day, Mistral, since you fucked Merry in a hallway in the middle of all the guard and made them all jizz in their pants! A DAY.

Anyway, the chapter finally ends with Merry telling Mistral to get naked so he can help with the foreplay, and I just can’t be bothered to care about yet another sex scene within the first few chapters of this book.

A series that’s built around magical faerie sex somehow has the most boring sex scenes imaginable. How’s that for irony?

One response to “Mistral’s Kiss Chapter 3: It’s all downhill from here”