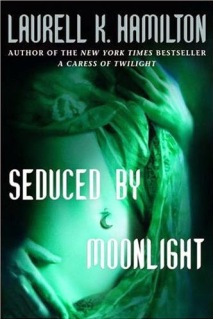 Chapter 34 begins with Merry being brought to that spring that she and Adair brought back to life with their love, or some crap. Fflur makes Merry drink a cup of the water, and then she begins washing Merry’s wounds in the spring. Merry notices that the pain is slowly lessening, from sharp pain to a dull ache.
They go back to the queen’s bedroom, which had been thoroughly cleaned during the banquet. Galen helps Merry strip down, and then Doyle curls up into bed next to her. Frost tells her that he will give up the chance to sleep next to her as there is someone else who needs her more, and Adair comes to the bed. He tells Merry that the queen has allowed him to become ‘Merry’s’ if she will have him, and of course Merry welcomes him into her throng.
They wake up later and the queen is standing above them at the foot of her bed. She tells Merry that she isn’t sure who she envies more, Merry for being surrounded by her men, or her men for laying with Merry. She also tells them that because of Merry, she has chosen several guys to take to her bed this night.
After the queen leaves, Merry wonders where the rest of her men are, so she sends Rhys off to look for them. A short time later, they return. All of them, Barinthus and Usna and Abloec and Onilwyn and Amatheon and Hawthorne and Ivi and Brii. ALL OF THEM STUPID FUCKING NAMES.
They do some stupid mock marriage ceremony, I kid you fucking not. Merry agrees to protect all of them, and Onilwyn seems to take offense to this. He thinks that means Merry now controls all their fate, but Merry reasons that they all are in charge of their individual fates, she is responsible for them all as a whole.
“An absolute monarch who believes in free will, isn’t that against the rules?” Onilwyn asked.
“No,” I said, my face buried against Adair’s skin, “it’s not. Not against my rules.” My voice was beginning to drag with that edge of sleep.
“I think I will like your rules,” Onilwyn said, and his voice, too, was growing heavy.
“The rules, yes,” Rhys said, “but the housework is a bitch.”
“Housework!” Onilwyn said. “The sidhe don’t do housework.”
“My house, my rules,” I said.
Actually, it’s Maeve Reed’s house.
So all the new men start bitching about how they don’t want to do any housework, and the sex better be damn good if they’re expected to do housework!
Merry yells at them all to be quiet so she can get some sleep, and the chapter ends with Merry overhearing Rhys brag to the new guys about how amazing the sex with Merry is.
Wait, that’s how the FUCKING BOOK ENDS. No warning, nothing. Rhys is bragging about the sex, and Merry wonders if she’s truly a mortal any more, and the book ends.
Good fucking riddance. NOTHING HAPPENED in this book. What was the plot? Was there a plot? It was essentially Merry frolicking around while people kept trying to kill her. She transforms some of her men into gods, a magical cup comes to her from where-fucking-ever, she stops the queen from butchering the guards, and fights a duel. And yet, nothing fucking happens.
At least the first two books had a plot. The first one had Merry coming back to Faerie and learning she’s now a co-heir to the throne. Book two had Merry trying to figure out who loosed the Nameless and also those elder god ghosts. This book had… ?
The worst thing, though, is that I think the next few books have the same exact plot. So, stick around, folks, because you’re not at all in for a treat.
With this, I’m taking a bit of a break. I’ll still be posting, though not as much, and about my OWN adventures in writing. Also about running, since my marathon training plan starts mid-March. I’ve also taken up painting, so you may get some of my “art”. I will also be moving somewhere in this break, and I may do a few reviews of other books I read. Everything I write during this break will be better than ONE LKH novel, I guarantee you that.