So, as I’ve been reading through and reviewing the LKH Merry Gentry series, I’ve also been working my way through the backlog of LKH books I’ve avoided since I stopped reading them in 2007 or so. Back then, I just didn’t care to slog through all the sex scenes that took away from what I believed to be the true spirit of both the Anita Blake Vampire Hunter and Merry Gentry series – an actual plot. I gave up on both series after reading through The Harlequin, an Anita Blake novel. I just didn’t want to bother with it any more. I was one of the fans LKH called out in her blogs who “couldn’t handle” the sex, who was “jealous” and envious of her characters’ sex lives, etc… Whatever, I gave up. I had much more important things in my life than reading through books I just didn’t care about.

I came back to the series just a month or so ago pretty much out of boredom. Through a library I have access to, I have gained access to all the novels in e-book form, so it made picking up the series both easy and free – two things I very much love. I finished reading the work of a few authors I actively love – Jacqueline Carey and Anne Bishop – and was looking for something easy to read. And the LKH books are not difficult books to read. I read very, very quickly, so I could blast through these books in a few days of reading for an hour or so before bed each night. I got through the remaining books in both series in the span of like three weeks. In the Anita Blake series, I was actually pleasantly surprised to find that some of the books had more of an actual plot than just “I have so much sex, you’re all jealous of my sex, here’s a ton of weird sex scenes!” and were actually quite enjoyable. The Merry Gentry series was still basically the same, but I’m a girl and love faeries and magic and all of that garbage, so whatever, I didn’t mind reading through it.

Until I came across the deep throating scenes.

In both of her most recent Anita Blake and Merry Gentry books, there is a lengthy scene where the main character deep throats one of her main dudes. Like, full chapter descriptions of this. And it was the most goddamn hilarious thing I have read in a long, long time. Holy, holy shit, you guys.

I was out at my parents’ house when I read the first one, in the most recently released MG book. I just started guffawing, yes literally guffawing, to the point where my mom came to see if I was okay. I set my Nook down and had to go do something else. I could not handle it.

The other night, I was reading the Anita Blake book Kiss the Dead and came across another insane deep throating scene. It was just too much for me to read back to back books with this. It was like 9:30 at night and I was just laying in bed crying from laughing so hard. How. How could anyone think this is remotely sexy? The deep throat scene happened immediately after Anita has sex with her “Lion Bride” Nicky.

I am not making this shit up.

In a previous novella, Anita Blake used her vampire-succubus powers to “roll” a werelion named Nicky in order for him to help her escape from his – it doesn’t even matter, it was a stupid book but I read it all in one hour sitting because it was so short. And it was about 90% sex, ughhh. By rolling Nicky so completely, he loses all free will and Anita basically controls Nicky completely. He becomes like the “Brides of Dracula” who followed Dracula’s orders without question. Her Lion Bride.

Anyway, so in Kiss the Dead, Anita spent the first 10 or 12 chapters actually on a vampire hunt. It was pretty good action, and I was glad to see it. I really quite enjoyed the first several chapters; it felt back to old form. But, after Anita deals with all the vampire stuff, she returns home, has sex with two of her boyfriends, then goes to another boyfriend’s house to stay the night. During this, one of her vampire boyfriends accidentally injures her mouth during an argument, so to heal Anita takes her Lion Bride into these big gym showers. He has sex with her once in the locker room on one of the benches (gross – do you know how gross this is? So gross) but after the sex they realize that Anita did not feed the ardeur.

Let me explain this ardeur. It is basically LKH’s plot device that ‘forces’ Anita to have sex constantly. Anita’s main vampire boyfriend, Jean Claude, comes from a line of vampires whose main power is through sex and seduction. Most of them are incubi or succubi who gain energy and power through sex. Through Anita’s connection with Jean Claude, she absorbs some of his incubus powers and now can feed through sex – her ardeur. It is always fucking italicized and it’s the dumbest plot device ever.

They decide to move to the showers to clean up, and Anita realizes that her sex with Nicky helped to heal her mouth, so she can now perform oral sex on Nicky. Anita loves oral sex, which is great! But it also means that we get SO MANY scenes of her going down on a dude. And let me tell you, girl loves to slurp a flaccid wang. Every time she writes an oral sex scene, it has her either discussing how much she (both Anita AND Merry share this!) loves to put all the man-bits in her mouth, penis and testicles, while they’re flaccid and feel them grow in her mouth as she pleasures them, or if the dude is already erect before the oral starts, how sad she is to miss out on mouthing that droopy dong. Seriously. Every single time. In both series.

Lucky for us Nicky isn’t yet hard when the oral starts, so we get to read all about it:

If Nicky had been shaved all the way I would have sucked and rolled those delicate balls into my mouth, but the hair between the teeth – not my favorite. But either he shaved, or didn’t need to, above, and that I took into my mouth completely. He was still small, loose from the heat of the water, so I could take all of him easily, rolling, sucking, licking, enjoying the sensation of him in my mouth when he was still soft enough that I didn’t have to fight to breathe, or fight my gag reflex. I could just enjoy myself and I did. He didn’t stay small long.

So she starts going to town on his dick “driving him in and out of my mouth so that we were mimicking what he’d done earlier between my legs”. She starts taking him deeper into her mouth, to the point where he’s touching the back of her throat. However, she cannot do this without a bit of work on her end, so she grabs his ass to push him farther into her throat.


I let go, put my hands behind him to hold onto his thighs, while I forced myself that last few inches until my lips touched the front of his body completely, my mouth locked around him. … I drew back off of him slowly, and had to cough. My eyes were tearing up, and my nose was beginning to run. I moved to the side of Nicky’s leg and let the spray from the shower hit my face enough to clean the tears and snot away. In movies they clean the actress up between shots, but in real life, it’s messy. It was my body trying to get rid of whatever the fuck was down so far, and not being swallowed.

Let’s ignore the many, many grammatical and punctuation problems there and just focus on what the fuck. What the actual fuck, LKH? This is supposed to be sexy? “I mouth fucked him so hard I snotted all over us!” Are you fucking kidding me? This is where I started laughing.

Nicky begins begging Anita to release the ardeur so that her gag reflex goes away completely and she can truly deep throat him, so she does so. Nicky puts his hand on the back of her head to push her into place and Anita tells him to hold her in place when she gets all the way down so that she cannot breathe.

You’ll tap out? Like in wrestling? Tap the ring floor to get the ref to call it?

This is sexy, guys! Make sure to tap the fucking mat when you get a dick stuck in your throat!

So they go back into it and Nicky is holding her down on him. She starts struggling to breathe and fighting against his hold, but he won’t let up. She finally taps out and after a scary moment of time where Anita fears he may not let her go despite her trusting him fully (and also, did you fucking forget that he HAS TO follow your orders without question? He HAS TO, he no longer has the free will to disobey Anita. In any other scene involving Nicky, the literal second Anita tells Nicky to do something he HAS to, but in this one sex scene she gives him an order of “let me go when I tap out” and when she finally does, he takes his dear sweet time to do it. WAY TO CONTINUITY THERE, LKH), Nicky lets her go to breathe. After a few more deep throated slurps, Anita begs Nicky to just fuck her and they get back to the normal sex I won’t bore you all with.

The Merry Gentry deep throating scene in her most recent novel, A Shiver of Light, is even more laughable, but we’ll get to that in more detail when I get to reviewing it. Let’s just say that Merry doesn’t give up due to a gag reflex.

I just am floored by how jarring these deep throat scenes are. I’m used to all the sex in LKH novels – I typically just skim through them because they’re all basically the same thing. Then we suddenly start getting these deep throating scenes where it’s almost comically real. I don’t want to read about all the weird sex things that happen in real life. LKH gets it right that in movies you don’t get all the weird stuff, but I don’t want to fucking read about it either! Having to stop so that the main character can shower snot rocket her cumsnot mid-suck is not what I want to read! 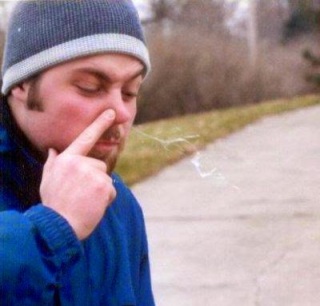 But it totally makes for an entertaining blog post!