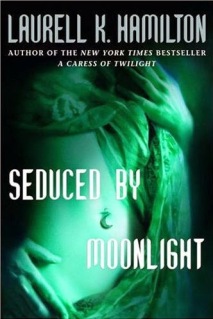 Chapter 25 begins with Barinthus carrying Merry through the snow to the entrance to the faerie mounds because there’s snow on the ground, and Merry couldn’t possibly walk through the snow in her miniskirt and 4” heels. Merry feels like a child being carried in his warm, strong arms, which isn’t weird at all after, you know, they metaphorically fucked in the ocean. Except Barinthus is totally ignoring Merry and it’s pissing her off.
If it had been almost any other guard whom I had had such an intimate moment with and he’d ignored me like this, I would have done something to make certain he could not ignore me. But it wasn’t anyone else, it was Barinthus, and somehow it seemed beneath both or dignities for me to grope him.
But the sidhe are above thinking everything is about sex, remember!
So Barinthus notices that Merry is acting kinda weird, and asks her if she is warm. He is apparently using his magical abilities to warm the air around her. She hadn’t noticed at all because she was using her magic to shield herself from the magic around faerie. If she lowered her shields around faerie, then she feels the strength of too much magic and it overwhelms her.
Galen comes over and asks if he could feel the warmth if he jumped on Barinthus’s back. Barinthus tells him that the sidhe are impervious to the cold, but it seems like everyone except Barinthus and Merry are cold. Nicca complains that he had never felt cold until this day, and Sage tells him that it is because the wings are of butterflies and are not meant for winter snow.
Merry then realizes that Barinthus keeps referring to her as Princess, not as his usual nicknames for her (Merry-girl), and so she calls him out on this. Barinthus tells her that he is now in danger because she brought him back to his godhead. Merry tells him that surely he will now come to LA with them, since the ring reacted to him and the queen has allowed everyone to which the ring has reacted to come to LA with her. Turns out the queen believes that Barinthus has too much power to be a part of Merry’s entourage, and the queen fears what would become of the Unseelie Court if Barinthus were to become king.
So the chapter ends with Merry thinking about what will happen when she enters the Unseelie mound, especially if Barinthus, being one of the strongest of the sidhe, is in danger for simply being one of her supporters. She wonders if she has what it takes to be a good ruler.

One response to “Seduced by Moonlight – Chapter 25”