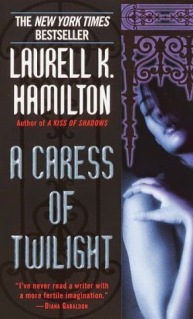 Chapter 9 begins with Maeve Reed standing in the entrance to the living room. Merry realizes Maeve is using glamour to appear more human to everyone in the room. She was tall, blonde, and model-skinny, like all the sidhe, but she appeared too-human, not as sparkly sidhe as Merry knew she was. Julian rushes to Maeve, and begins apologizing for Ethan’s rude outburst, but Maeve decides to send Ethan away, if he truly believes the sidhe to be monsters.
Ethan walked around the couch, too. “I have no problem with you, Ms. Reed. You’re Seelie Court, the Bringers of Beauty and Wishes.” He pointed as us a little dramatically, I thought. “They are the stuff of nightmares and should not be allowed in this house. They are a danger to you and everyone around them.”
“How much business are you losing to us?” I asked, and for some reason my voice carried into the sudden silence.
OF COURSE IT MUST BE BUSINESS RELATED, MERRY. OF COURSE ETHAN IS JUST ANGRY THEY’RE LOSING BUSINESS. SHUT UP! Ugh.
Julian stops Ethan from responding and just sends him home. Ethan turns to Maeve and again grovels to her that he “knows the Seelie are different from what the Unseelie are.” Maeve tells him that she hasn’t been of the Seelie court in over a hundred years, and Ethan frowns, apologizes some more, and leaves.

Maeve then pouts a little, telling Julian that she’s “feeling terribly neglected” now that Ethan is gone. WHAT. You sent him away, lady! Julian turns his attention to Maeve, and they BOTH BEGIN GLOWING AT EACH OTHER! What?
Maeve is using her glamour to appear more human, more beautiful, and Julian begins unknowingly using his human magical glamour abilities to mirror her. Merry is staring around the room at the other humans, and they’re all staring at Maeve like they’ve never seen a woman before.  Julian begins super mega complimenting Maeve, who blushes slightly. Merry feels the magic of that blush and realizes that Maeve used her own magic to create it, it was not a natural blush. After a few moments, Julian turns toward Merry and Co and announces that Maeve has persuaded him to remain tethered to her side for the duration of Merry’s visit.
Merry then realizes the reason Maeve hired Kane and Hart – to protect HER from Merry and her Unseelie guards. Maeve was apparently afraid of the Unseelie Court, enough so that she would not face them without magical (her wards) and physical (her guards) backup.
You’d think the fey wouldn’t be so superstitious, especially around other fey, but they often are. My father said it came from knowing almost nothing about any other fey culture but the one we were born into. Ignorance breeds fear.
Oh cool, that again.
The chapter ends with Merry deciding that she needed to do something to break through Maeve’s fear of the Unseelie, and to do so, she was going to be as rude and human as she possibly could.
Characters Introduced:
Maeve Reed – we learn that Maeve is terrified of the Unseelie Court, even though she had invited Merry and Co to visit, and is using much magic and physical power to keep the Unseelie from dangering her
Themes Introduced:
More ‘the fey are ignorant about other cultures’ because we’re surely not sick of that yet.
Sex: No