Chapter 18 begins with Merry pressing her head against the bathroom door to eavesdrop on Doyle’s conversation with the queen. Doyle immediately notices her presence and opens the door, however he blocked Merry’s view of the mirror. Merry tells him she will be getting ready for bed, and asked Doyle to please stay inside for a bit longer.
Merry anguishes over what to wear to bed, as apparently she only wears fancy lingerie to sleep. Is this another thing people do, wear ridiculous lingerie to sleep at night? I wear pajama pants with the fucking tootsie roll pop owl on them and whatever tank top looks comfy that night to bed, so apparently I’m some non-fancy nightwear wearing philistine I guess.

We so sexy.
Merry puts on some silk nightshirt that, while the material is still a bit too sexy for her taste with Doyle staying the night, it hits her knees and is the least sexy thing she owns. After changing, she realizes that her wounds from her fight with Nerys were still bleeding. Doyle exits the bathroom and notices Merry’s wounds as well. Merry thinks she may need stitches in the wound in her upper thigh, but she was hesitant to show Doyle the wound as it was so high up on her inner thigh, and she wasn’t wearing any underwear.
Oh of course she isn’t.
Doyle asks to see the wound on her arm, so Merry lets him take a closer look at it. He remarks that it is deep and quite likely punctured muscle. He also tells Merry she is cool to the touch, and that she must be in shock. Merry is in need of healing magic, but Merry knows neither of them are able to heal by touch. She instead asks for bandages for her wounds, and Doyle tells her that he can indeed heal by magic.
His nickname, Baron Sweet-tongue, referred to his magical ability to heal by touch. Touch of his tongue, that is. He’s going to lick Merry’s wounds closed, much like a dog would lick at their wounds to aid in healing. Merry realizes that either Doyle helps her heal or she would require a trip to the emergency room, so she reluctantly lets him lick her wounds. 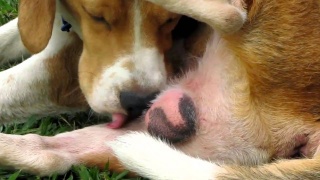 Who’s a good Doyle? You’re a good Doyle!
So Doyle begins lapping at her arm wound like a dog laps up stew. Merry feels warmth begin to resonate up her arm, and that the energy from Doyle’s healing mouth is rather sexual in nature. It takes a few minutes, and then Doyle pulls away, hoarsely telling Merry that it had been a very long time since he had been able to do that.
He then asks to help Merry heal the wound on her upper thigh. She’s hesitant again because she’s not wearing anything under the nightshirt. She just keeps repeating that “it’s very high up on my thigh” as her reasoning for why she’s so hesitant to show him the wound, and finally after like three times telling him this she just outright says she wasn’t wearing any underwear. Doyle asks her to just fucking put some on.
Well, he doesn’t say it like that, but GOD DAMN I wish LKH didn’t try to make her “strong female characters” try for subtlety. She is not good at writing it, and it does not feel natural at all when she has her main characters try for it. It’s just super forced and awkward. And she tries to do it CONSTANTLY throughout her novels for some reason??? I mean, check this shit out:
I resisted, and he released me. “It should not still be bleeding, Princess Meredith. Let me heal it, as I did your arm.”
“It’s very high up on my thigh, Doyle.”
“The hag was trying to pierce your femoral artery.”
“Yes,” I said.
“I must insist on seeing the wound, Princess. It is too vital an area to be ignored.”
“It’s very high up on my thigh,” I said again.
“I understand that,” he said. “Now, please lie down and let me look at it.”
“I’m not wearing anything under this shirt,” I said.
“Oh,” he said. Emotions played across his face so quickly I couldn’t read them, like clouds passing over a field on a windy day. Finally, he said, “Perhaps you could put something on so that I might look at the wound.”
Bah! This is how all fucking conversations in this novel go! So much redundant back and forth repeating the same fucking concept over and over and over. And that passage is just between two characters – imagine this as a group conversation. It is so goddamn frustrating to read passages similar to this over and over again.
So Merry finally puts some underwear on, after choosing through her super sexy unmentionables and picking the least sexy of the bunch, some plain black satin pair. This is so fucking unbelievable to me. Every girl has a pair of unsexy basic boring underwear. We wear these when we’re pulsing blood from our crotch. You do not wear your sexy best during shark week. It is an unwritten rule of womanhood.
You suck so much at writing believable women characters, LKH.
Doyle has her back turned to Merry to allow her to put on her underwear, and she lets him know when he can turn back to her. Doyle then begins whining about how mean the other ladies at court are, that they would just tease any of the queen’s guard with their nudity, but he remarks that Merry is not like that at all. Doyle tells Merry that what hurts the most is that a lot of the court treat the guards like eunuchs, like they have no feeling left, but they do. Merry then learns that the queen won’t even let them masturbate. They’re not allowed any sort of release.
Merry finally lays down on the bed so that Doyle can heal her leg wound. Doyle maneuvers between her legs so that he can get at her wound. Once he gets in place, he blows sensually on her inner thighs, and Merry realized that this was deliberate.
So after Doyle whines about how unfair the women of court treat him and the other guards, he immediately fucking flirts with Merry by blowing on one of the most sensitive areas of a woman’s body without Merry’s permission. This… what? Merry had spent the previous several pages trying to make sure she doesn’t unintentionally flirt or tease Doyle, and the second he gets all up in her ladyparts to heal her HE starts flirting with HER.
Arrrrhghghg.
So he continues flirting with her, playing with her, softly biting her inner thighs all while Merry sits there and just takes it, not teasing back. Finally, she does, and she takes off her nightshirt revealing her bare breasts. She realizes that she probably took it a little too far, but Doyle tells her not to cover her breasts. Finally Doyle begins licking at her leg wound to heal it, and because he had just been teasing her body, Merry’s body took it as a sexual thing, causing her skin to glow and warmth began to expand through Merry from the wound. Doyle’s skin also begins to glow, and Merry begins to feel her power rise inside of her.
She finally reaches out and touches Doyle, letting her power flow through the both of them, and it sent Doyle to his knees on the floor. Merry sees him fighting against something, and she realizes he’s fighting to stop the building orgasm. He finally gives in to it and totally blows his man batter all over his pants.

Don’t tell your friends or I’ll say you’re a slut.
He immediately blames Merry. “What have you done?” he asks, frightened. Merry fights back, telling Doyle that she never touched him down there, she never meant to force his release, etc etc. Doyle realizes that Merry is able to heal through sex, which is an ability of the Seelie Court, and rushes to the bathroom to tell the queen about his penis colada explosion and Merry’s new ability to heal through sex. He is terrified that the queen will punish them for their transgression, which is punishable by death.
He comes back from the bathroom after a bit and lets Merry know that the queen will not punish them, but then he pouts. Because he didn’t bring a change of clothes because OF COURSE THAT IS A HUGE PROBLEM, you fucking whiny weiner, Doyle. Merry gives him a pair of Roane’s boxers, which are OF COURSE too small for Doyle.
The chapter ends with Merry falling asleep alone in her bed, leaving Doyle to sleep in a sleeping bag on the floor in his tight fucking panties.
Characters Introduced:
None
Themes:
Doyle can heal by tongue and Merry can now heal through sex.
Sex:
https://youtube.googleapis.com/v/VLnWf1sQkjY&source=uds